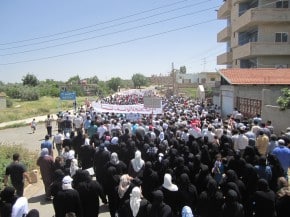 Local citizens’ committees have been established in nearly every Syrian city since the beginning of the Syrian Spring in March 2011. They speak out explicitly against the use of weapons, document the unending violations of human rights, organize the peaceful protests, and undertake important work to develop an open civil society. The composition of the committees is very diverse and differs from region to region. All social classes, religions, and ethnic groups are represented, as well as both men and women. Some committees are more religious, some more secular, some are made up largely of young people, and some have a vocational character (for example, being composed of lawyers).

There are now almost three hundred of these local committees. Their members, the activists, run great risks in undertaking their political work: The regime has sought from the beginning of the protests to infiltrate and destroy the committees. Many activists have gone into hiding and all meetings must take place in secret. As important as the committees are for the resistance, the last months of exhausting nonviolent resistance have left their marks. Many committees are no longer able to bear the financial costs of their work, above all, because the activists are not able to hold a steady job.

Two large networks, the Local Coordination Committees of Syria (LCC) and the Syrian Revolution General Commission (SRGC), were established a few months after the beginning of the revolution. About half the local committees belong to one or the other of these networks. The networks carry the voices of the protests abroad and make sure through their intensive public relations that the world learns of the crimes of the Assad regime. Both networks are committed to nonviolent resistance against the dictatorship and implement their campaigns accordingly.

In addition, the networks organize strikes, coordinate urgent humanitarian aid, and constitute the political representation of the young movement for democracy in the recently established Syrian National Council. The activists make up about a third of the votes in the 235-member council, though this is not equal to the weight of the work they are doing presently. While the two networks are organized as direct democracies, it is two women who run the two organizations. Razan Zaitouneh, a lawyer from Damascus who was awarded the Human Rights Prize of the European Parliament, has been in hiding since the beginning of the uprising while playing a large role in building the LCC. Suhair Attasi, who is the driving force in the SRGC, was forced to leave Syria in December, 2011 out of concern for her safety.

Webseite of Local Coordination Committees of Syria (English and Arabic)