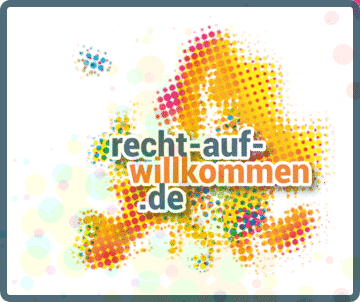 “Take in refugees – abolish all causes of flight” – this is what the German initiative Recht auf Willkommen (“Right of Welcome”) is promoting. More than 4 million people in Germany are actively supporting refugees and, that way, creating a welcoming culture of solidarity. This movement must not lose ground, but should become even stronger! People or groups supporting refugees find a platform to connect with each other. The initiative is claiming a strong position against the (radical) right-wing populist movements, but also against rejections of refugees in the heart of society. Read their call here!

“For a civic platform against isolation and xenophobia: Refugees stranding at European railway stations; razor-wired fences hastily raised along the borders; extreme social inequalities and increasing violence – what Europe perceives as a state of emergency long since is the hard reality for ever growing parts of the world’s populace.

Increasing destructions of living conditions, hatred and violence are not falling from the sky. They are the result of a global politics placing economic interest over human interests. The thereby accepted exclusion of the majority of the world population forces people to flee and fuels violence. The unbridled free trade to the expense of the global poor, an economic policy leading to the destruction of the environment, the arms trades with dictatorial regimes, and the delivery of weapons in crisis regions dramatically increased the social inequalities between and within countries.

Crises bear fear; a fear exploited by right-wing populist movements like the German Pegida or the AfD. Dull and hollow rabble-rousing against refugees, against the media, and against an open Europe, these movements serve the longing for national solutions and claim those will guarantee order and stability.

Globalisation may not be a one-way street. Globalisation and migration are two sides of the same coin. We should meet the challenge in a way that makes sure that the encounter of different cultures ultimately includes chances to form the conditions for a world society. This includes a vision for a society allowing everybody around the globe safe access to decent living conditions. Necessary are alternatives to the dominating profit- and growth-oriented economic regime. Necessary is the safeguarding of public services here and beyond all national borders. Only by this way the twofold right, the right to stay and the right to leave, will have its breakthrough. Only where a dignified life is possible and only where no one is forced to escape due to war and social dislocation the right to free movement is complete.

We take a stand for a strong welcoming culture and oppose any solutions that are based on national exclusion and the violent walling-off of the European borders.
We support the freedom of movement for all people – no matter if they are fleeing war, ecological destruction, or poverty.
We demand the reinforcement of the law of asylum and its completion through a migration law based on human rights and not on economic profits.
We urge for the rejection of the dominating destructive dynamics and commit ourselves to a Europe in solidarity. There are a great number of us.”

The call has been published on the International Day of Migration (18.12.15) by Attac, Medico International, the “Institut Solidarische Moderne” and “Publik-Forum”. Adopt a Revolution is supporting this call – especially regarding the abolishment of all causes of flight – but also the networking of Syrian refugees in this country and the clear statement against right-wing populist movements. Please support the call by signing it!

One of the main causes of flight remains the daily abuse of deadly barrel bombs in Syria. For this purpose, civil activists of the initiative Planet Syria also started a call – against barrel bombs and for a start of serious peace negotiations. Please support the Syrian civil society by signing it here!