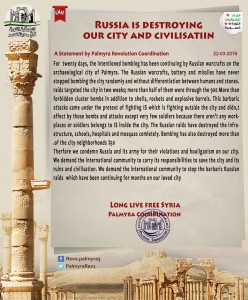 Civil activits from Palmyra/Tadmur report about heavy attacks on their hometown. The city has been under control of IS-jihadists in the last months, now the Syrian regime’s army, with support by Russian airstrikes, progresses towards the city – and is obviously not saving humans nor acient ruins. We document their statement condeming these attacks.

Russia is destroying our city and civilisation

For twenty days, the intentioned bombing has been continuing by Russian warcrafts on the archaeological city of Palmyra. The Russian warcrafts, battery and missiles have never stopped bombing the city randomly and without differentiation between humans and stones. More than 900 raids targeted the city in two weeks; more than half of them were through the forbidden cluster bombs in addition to shells, rockets and explosive barrels. This barbaric attacks came under the pretext of fighting IS which is fighting outside the city and didn,t affect by those bombs and attacks except very few soldiers because there aren’t any workplaces or soldiers belongs to IS inside the city. The Russian raids have destroyed the infrastructure, schools, hospitals and mosques comletely. Bombing has also destroyed more than 50% of the city neighborhoods.

Since late 2011 Adopt a Revolution is supporting unarmed Syrian activists in their uprising against the dictatorship and jihadist suppression. With their local projects they give people a chance, to stay in their contry. Can you help support these projects?