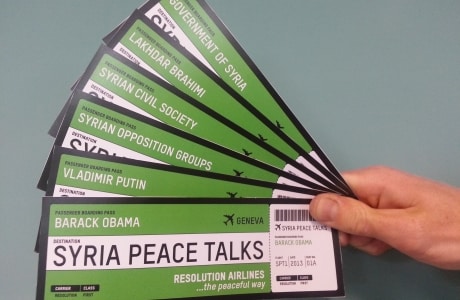 “Don’t let Syria down!” This is the title of a petition initiiated by Oxfam UK supported by Adopt a Revolution and a group of international humanitarian aid organisations. It is calling upon Vladimir Putin and Barack Obama to get the Geneva II peace talks for Syria back on track.

The crackdown on the Syrian revolution already demanded more than 100,000 deaths – and daily hundereds are killed in Syria. When the uprising began in March 2011, the Assad-regime chose to violently prosecute unarmed demonstrators who took the streets to demand freedom and democracy. After months of imprisonment, torture and indiscriminate killing on demonstrations, defected soldiers started to organise and fight back the regime, that as a reaction escalated the use of violance against rebels as well as civilians.

After years of little reaction from the international community, in May 2013 USA and Russia agreed on a renewed attempt for a peace conference to be held in Geneva. However, a date for the conference is still not set, neither the list of participants is clear. It appears there is a lack of interest in finding a solution to the crisis in Syria, as the Russian government is backing the Assad-regime and the USA supporting the opposition. In meanwhile, civilians continue suffering and almost 2 million have fled the coutry. Non-violent, civil society activists who started the uprising with the aim of a secular, liberal and democratic state are left without support. They don’t expect anymore anything from the Syrian opposition abroad, however, they expect the world leaders to get active and make peace talks possible – and Geneva II talks at the moment are the only option on the table to stop the fighting.

The petition is asking Barack Obama and Vladimir Putin to put their differences aside, and throw in their political weight to get the Geneva II peace talks on track – and make them a success. There is no other option on the table to stop the suffering in Syria and to give a civil society a chance.

To:
Vladimir Putin and Barack Obama, President of Russia and President the United States of America
cc: Lakhdar Brahimi, United Nations and League of Arab States Envoy on Syria
cc: G8 Leaders, Governments of France, Italy, Germany, UK, Japan, Canada
Thank you for committing to organize a peace conference for Syria. However, I am writing to express my grave concern that these talks have not yet been scheduled. The people of Syria cannot wait any longer for an end to the fighting. Over 100,000 people have been killed, millions have been displaced and are in desperate need of aid. The conflict is spreading, threatening the stability of the region.

For lasting peace to be achieved, the peace process should ensure equal representation from all sides in the conflict, involving men and women from all of Syria’s diverse communities, and including those who have already been forced to flee the country. In the mean time it is vital all sides make every effort to ensure people can access the humanitarian aid they need.

Please do everything you can to make the peace talks a reality, and a success.

Oxfam UK has committed itself to deliver the petition to the presidents. Copyright image: Oxfam UK