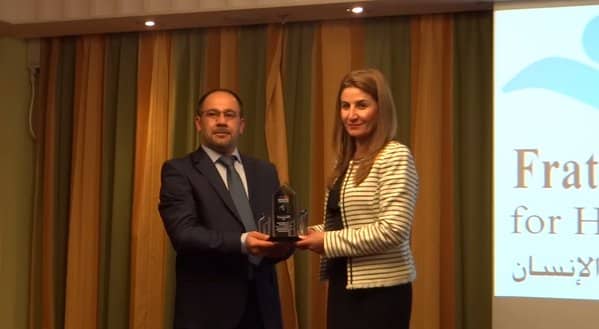 The Member of Parliament Viyan Dakhil has been awarded with the Razan Zaitouneh Prize 2015. On Friday 18, 2015, the Fraternity Foundation for Human Rights organized a ceremony of honour for her in Berlin, Germany, which was considered as a bridge of fraternity between Syrian and Iraqi people. Adopt a Revolution attended the ceremony as the award winner of last year. Read here about the course of the evening!

The Fraternity Foundation for Human Rights organized a ceremony in Berlin on Friday, December 18, in honour of the Iraqi Kurdish Yazidi Member of Parliament Viyan Dakhil. She was awarded with the Razan Zaitouneh Prize for supporting human rights defenders of the year 2015. Many militants, Syrian and Iraqi Human Rights Organizations, German diplomats and activists attended the ceremony in the Regent Hall for Formal Festivals in the center of Berlin.

The ceremony started with a video about Viyan Dakhil. After this, a speech on behalf of the Fraternity Foundation for Human Rights was given by Medya Dhir, the Public Relations Coordinator and representative of the commission of the Razan Zaitouneh Award 2014. In her speech, she talked about the ongoing wars and conflicts in the Middle East, and about the way that Syrian and Iraqi people – whether they are Arabs, Kurds, Yazidi Kurds or Assyrians -have to pay the price for the horrible conflicts caused by the Syrian Regime and ISIS.

Further on, the General Manager of the Fraternity Foundation of Human Rights Miral Biroreda handed  the award to Viyan Dakhil. In her following speech of thanks, she talked about the history of Yazidi Kurds, their suffering from killing, displacement and exile in the past and recently because of ISIS. She then appealed to Syrian and International Organizations to support the cases of Yazidi female kidnapped by ISIS, and the need for all of us to help to destroy this terrorist organization by all means. She also appealed to the European Union and the United Nations to provide help to Yazidi people fleeing from the oppression of ISIS to European countries. She mentioned the heroism of Razan Zaitouneh and  her militant attitudes  in defense of the Syrian  people.

The ceremony was attended by a group of Syrian lawyers including  the most prominent colleague of the Fraternity Foundation, Mazen Darwish, who is leading the Syrian Center for Media Freedom and Expression. Mr. Darwish improvised his speech talking about Razan Zaitounehs fate and about the militancy of Viyan Dakhil for defending the people who are exposed to injustice. Like Mrs. Dakhil, Mazen Darwish also talked about the crimes that the people in the  Middle East have experienced for years.

Ferdinand Kuiva held a speech as the representative of  the German organization Adopt a Revolution which is in partnership with the Fraternity Foundation for Human Rights. He pleasantly talked about civil values in Syria and about the militancy of Razan Zaitouneh.

Also the lawyer Orwa Nyrabia, who is a member of  the Center for Documenting Human Rights Violations in Syria (VDC) talked about the realtion between the people of the two neighbouring countries Syria and Iraq, who have both been victims of the terrible violations by the Syrian Regime and ISIS.

The ceremony was also attended by a number of Syrian and German activists and the organization “Jiyan” which is specialized to Yazidis’ affairs. Additionally, the ceremony was filmed by Maxim Alissa from Orient TV. The great evening concluded with discussions by a wide audience and conversations with the award winner Viyan Dakhil.

Congratulations to the Member of Parliament Viyan Dakhil for being awarded with this prize!