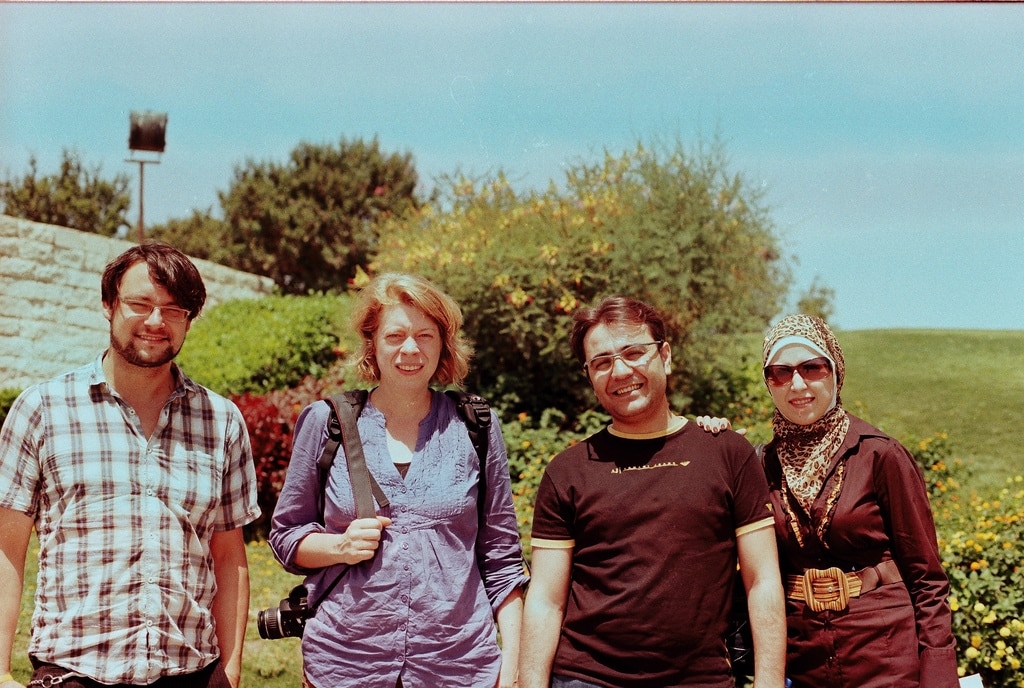 Today, 19 human rights groups, among them Amnesty International and Human Rights Watch, issued a joint statement demanding the release of the three media activists Mazen Darwish, Hussein Ghrer und Hani Zaitani and dropping of all charges. After more than a year in jail, they are to appear in court on Sunday. If they are convicted they could face 15 years in prison.

Their offence is to have written, blogged and spoken. They all worked for the Syrian Centre for Media and Freedom of Expression in Damascus. On February 16th, 2012, they were arrested together with Mansour Omari and Abdel Rahman Hamada, two of their co-workers at the media center. A week later, on Feb. 27th the Syrian judiciary indicated, they would be accused of publicizing terrorist acts.

I met Hussein Ghrer during the year of revolutions, the beginning of May 2011 – almost exactly two years ago. The Deutsche Welle Akademie, a German government media development agency, had invited us to a Blogger Summit in Cairo. We spend a wonderful afternoon with two other bloggers, Razan Ghazzawi and Michael Seemann, and Hussein’s wife in Al Azhar garden and interviewed young people and families about the revolution in Egypt.

We lay in the grass, had Kebab and played in the water fountain. The photos we took that day look like holiday pics.

Hussein was moving thoughts in his head. The fears of Copts we had spoken to got to him. He considered the rising confessionalism in Syria as one of the greatest obstacles to the revolution. Yet, just then, he could recount good experiences. He had discussed a catalogue of demands to the government with the people in his neighborhood. “There was one sensitive issue,” he said. “We want a democratically elected president, no matter what religion. I was expecting people to disagree, to want him to be Sunni. But all the people in my neighborhood were fine with our proposal.”

When his fellow activist Razan proposed to demand the president to be an Alawi again, just democraticaly elected, Hussein laughed. “That’s a crazy idea. But you are right. It would be good. We want the Alawis to be with us and not to fear the revolution.”

Hussein laughed a lot. When we spend the night out at a Lebanese restaurant I pointed to his beer saying that him and his wife were an interesting couple. “We are tolerant,” he said. “I am tolerant with her veil, and she is with my beer.” and they both laughed. We talked about raising childern. Him and his wife have two sons the same age as my daughters. The kidnergarden, he said, costs him 2000 dollars a year.  “We found one that’s affordable”, his wife said, “but I have to travel far.”

“How about you?” I asked Hussein. “You don’t drop your son off at the kindergarden?” He grinned a bit embarrassed, then twinkled cheekily: “I should, shouldn’t I? I know. After the revolution.”

In mid December 2011 he was arrested the first time. With him several other activists of the Centre for Media and Freedom of Expression. The campaign for their release was massive back then. So many people blogged and twittered or replaced their facebook picture with “FreeHussein” or “FreeRazan”. After ten days, Hussain was released. I send him an email wishing him a happy new year and asking if his wife and children were safe and offered my help for acquiring an EU-visa.

Hussein thanked for the campaign. He wrote: I wasn’t hardly tortured because of you all 🙂

I tried for the Visa. Maybe I was naiv thinking the German foreign ministry would do something for a wife of such a prominent revolutionary activist. Nothing worked. We emailed a couple times about the issue. Yet, it became more and more apparent that all European borders were closed. I was waiting his reply for another suggestion I made when I heard he had been arrested again.

For long there were no news. It wasn’t even known which prison he had been taken to. In summer last year, he started a hunger strike to protest the detainment of all prisoners of conscious. Like the other media activsts, he was detained at the Air Force Intelligence. Eventually, Mansour Omari and Abdel Rahman Hamada were released in Febuary this year. I read that Mazen Darwish, Hussein Ghrer and Hani Zaitani had been tortured and that their physical and psychological well-being was in question.

This is the last thing Hussein wrote on his blog:

Silence doesn’t serve us after today. We don’t want a country where we get imprisoned for uttering a word. We want a country that embraces and welcomes words.

On May 19th, Hussein Ghrer and his fellow activists are scheduled to appear before the Damascus Anti-Terrorism Court. The indictment “accuses them of ‘publicizing terrorist acts’ under article 8 of the Anti-Terrorism Law, enacted by President Bashar al-Assad in 2012. If convicted the men may be imprisoned for up to 15 years,” the rights groups’ statement said.